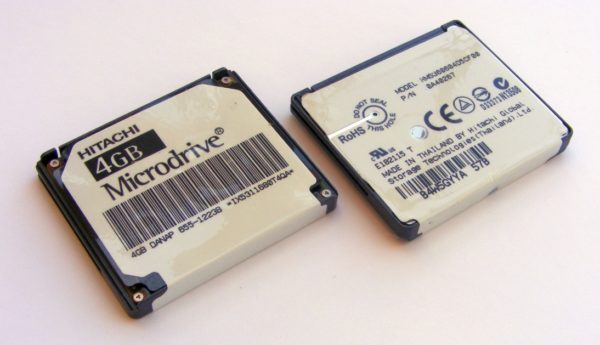 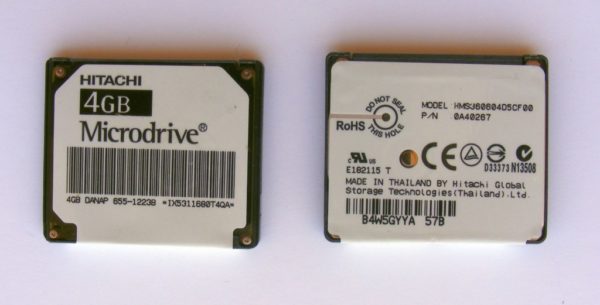 This is a genuine 4 Gb Hitachi Microdrive.

Please note that the Microdrives are not working and are sold as-is. They are not to be used to store any data.

With your watch, why not have an original 4 GB Microdrive ?

Please note that the Microdrive is not working, and should not be used to store data.

Some history about the Microdrive Hard-Disks :

Microdrive is a registered trademark for miniature, 1-inch hard disks produced by IBM and Hitachi. These rotational media storage devices were designed to fit in CompactFlash (CF) Type II slots. The release of similar drives by other makers led to them often being referred to as “microdrives” too. By 2015, Microdrives were viewed as obsolete, having been overtaken by solid-state flash media in read/write performance, storage capacity, durability, and price.

In 1999, IBM launched the first generation 1-inch Microdrive with storage capacities of 170 MB and 340 MB. The physical dimensions of Microdrive were 1.65″ × 1.42″ × 0.197″ (42.0 mm × 36.0 mm × 5.0 mm) and conformed to CompactFlash Type II card standard. A second generation of Microdrive was announced by IBM in 2000 with increased capacities at 512 MB and 1 GB. Following the merger of IBM and Hitachi HDD business units, Hitachi Global Storage Technologies continued the development and marketing of the Microdrive. In 2003, 2 GB and 4 GB models were announced[2] by Hitachi, followed by 6 GB capacity model in 2005.

As of July 2012, there are no known manufacturers of 1-inch form-factor harddisk drives. Hitachi had also stopped production of its trademarked Microdrive product.

Which means that the Microdrives used in my watches date from around 2003-2005.

There are no reviews yet.

Only logged in customers who have purchased this product may leave a review.